Taekwondo is one of the most systematic and scientific Korean traditional martial arts, that teaches more than physical fighting skills. It is a discipline that shows ways of enhancing our spirit and life through training our body and mind. Today, it has become a global sport that has gained an international reputation, and stands among the official games in the Olympics.

Let’s take a closer look at the meaning of the word “Tae” “Kwon” “Do.” It is composed of three parts as shown in the English spelling, though it is one word in Korean. “Tae” means “foot,” “leg,” or “to step on”; “Kwon” means “fist,” or “fight”; and “Do” means the “way” or “discipline.” If we put these three parts together, we can see two important concepts behind “Tae Kwon Do”.

First, Taekwondo is the right way of using Tae and Kwon ‘fists and feet,’ or all the parts of the body that are represented by fists and feet. Second, it is a way to control or calm down fights and keep the peace. This concept comes from the meaning of Tae Kwon ‘to put fists under control’ [or ‘to step on fists’]. Thus Taekwondo means “the right way of using all parts of the body to stop fights and help to build a better and more peaceful world.”

How your child can benefit from Taekwondo? 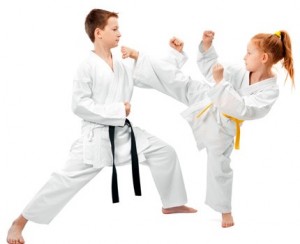 Taekwondo is a total learning activity. Lessons are tailored to your child’s age and skill level. Your child begins by practicing basic patterns and forms, board breaking, kicking, blocking, striking, and punching. These fundamental skills increase your child’s physical coordination, flexibility, balance, and mental acumen.

Taekwondo develops your child’s athletic abilities and self-awareness, and improves the child’s capabilities in self-defense.

Self-Discipline and self-esteem for your child 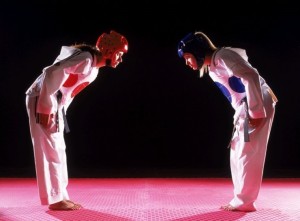 Taekwondo emphasizes moral development as well. Children learn respect for themselves and others, heightened concentration, and increased self-discipline and self-restraint.

The self-discipline that develops as a result of learning and practicing the techniques usually carries over into other areas of the child’s life. School grades often improve as your child learns to focus on objectives and to work toward achievement. The self-discipline and self-resect which Taekwondo develops can provide your child with the skills and mindset necessary to resist peer pressure